Oops, losing $8 billion on a gamble.

Misunderstanding Political Boundaries - Austerity Economics & Reaganomics- Sharing Social Program Costs - Why Men are Vital to Alberta’s Economic Growth - Taxes made Simple - Mistaking Alberta’s International Trade for Foreign Economic Policy- G9 International Trade Policy made simple-  Pipelines and Bitumen Pucks - Political Forecast (more of the same but much faster) - The Desire for Peace - When all Hope is Gone What do you Hope For? (hint, do some reflecting and find something new to pursue)

I get the feeling that Alberta Premier Jason Kenney could lose money in a one horse race. He has misunderstood the scope of his role and power since he stepped into office. Mr. Kenney's trade war is beyond his scope of authority.  Mr. Kenney and the War Room will complain and stir up division due to the Federal government’s refusal to go along with their plan. Well boys, here’s some bad news. Your jurisdiction begins and ends at the Alberta border. You have no say in world politics, that is the domain of the federal government. I hope to heck that the Alberta social studies curriculum includes the constitutional structure of Canadian government systems, an interesting document that Mr. Kenney may want to review.  Yes, Alberta sells raw resources to international markets and that is irrelevant when calling for a trade war with our largest trading partner.

Austerity Economics in a Nutshell as told by a squirrel

The UCP have modeled themselves after the Republican party since Reaganomics. All the way back to Maggie Thatcher and Ronald Reagan, that is the playbook they use to draw up their policies. Reaganomics is an austerity economic policy that fuels the economy through trickle down taxation policy by giving breaks for corporations to fuel job growth and investment. The focus is on selling their countries’ raw resources on the world markets rather than refining or creating the finished product at home. International labour and tax breaks draw businesses away from G9 countries. These countries shifted to selling raw resources to make up the manufacturing losses. G9 countries that rely heavily on resource trade squeeze the domestic market by importing finished products from our trade partners who buy our resources. Canada sells the US oil, but we do not purchase American manufactured goods, aside from produce, because they, like us, don’t produce anything that competes with the International market.  Selling without buying puts international trade out of  balance. We employ a bunch of people to produce the raw resources. Our International trade partners buy it and sell it back to us as finished products. International trade in a nutshell. That’s why manufacturing in G9 countries is drying up and why most of our goods are produced internationally.
Deregulation allows companies to act ethically as good business partners. Lastly destruction of labour advocates, who are a regulatory board that restricts economic growth.

The financial responsibility of Social programs need to move towards economic autonomy or at least sharing a greater part of the costs.  Ultimately, the government would like to see social programming that is self-sufficient or raises half of the cost of running the program through private donations, international grants, and federal funding.
Hospitals would need to fundraise, charge for services, increase parking and patient service fees, to increase funding that the government provides. Rewarding, nonprofits for offsetting and reducing operational costs is an austerity policy. The other savings that can be made in nonprofits is staffing costs. Staff reductions, clawbacks on wages and benefits, replacing staff with less expensive labour, increasing more production from current staffing levels. Austerity economics is a reality that Alberta nonprofits have endured for years, and continue during a pandemic. This affects healthcare workers, social programs, people living on income support, education, learning - (currently 1 in 6 Canadians is functionally illiterate), zoos, parks, camping (Provincial funding cut for Central Alberta camp for adults with developmental disabilities), recreation, and Albertans. 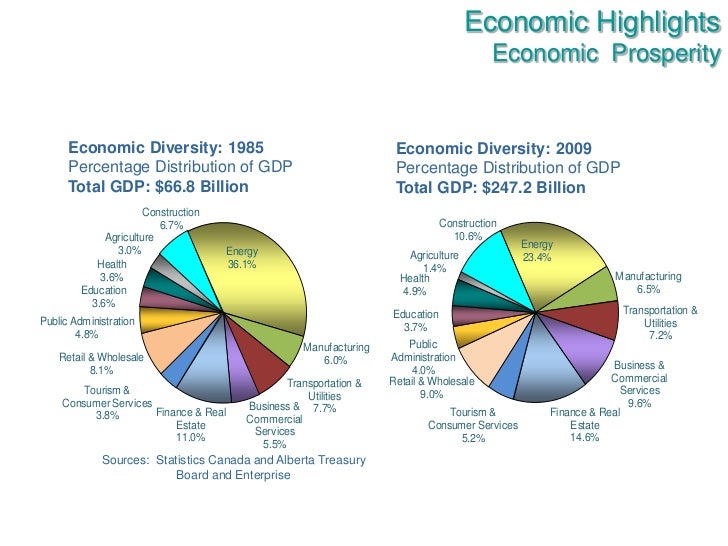 Alberta’s Economic Sectors - where the money comes from

I understand that this type of economic policy would have a great deal of appeal to those working in private industry. It might be less divisive if the government understood where Albertans work.  Focusing on private industry in construction, O&G, and manufacturing is to overlook where the other 58.7% of the economy and workers. Agriculture in Alberta contributes 1.8%  to the province’s GDP and employs very few, that is why it is ignored in the private industry category. O&G needed labour. Manufacturing needed unskilled labour and tradesmen. Deregulating agriculture, Monsanto vs. Schmeiser, coincided with the gradual selling off of the family farm or ‘going big,’ aka into big debt. There are trade-offs.

Reagenomics is inherently sexist and elitist. The wage earners who benefit are males, particularly males in trades. Conversely, females continue to work for minimum wage in the service and retail sectors.  It is a system that leads to CEO’s earning up to 287 times more than their workers.

Leaving Money on the Table

Big business is good business, small business is disposable. Like agriculture, it is too small to count. Taxation policy clearly demonstrates this point. Who pays more tax, the guy working for a wage of $150,000, or the CEO of the company, or the company?  If the company is West Edmonton Mall or Enbridge chances are the people who work for them collectively pay more tax than the company that employs them, or the company who holds their store’s lease. That is tax efficiency. Or leaving money on the table.

It appears that Mr. Kenney is reluctant to trust anyone around him to be as smart as him. Tyler Shandro is trying hard though. I get the impression he micromanages. Otherwise, why so many of his cabinet flew off on holiday is beyond me. He confirmed it by saying, my bad, I didn’t tell them explicitly.  Every Canadian, Albertan cancelled family plans and the cabinet needed instruction from Premier Kenney to follow Canadian health regulations?

This leads us back to where we started, a Premier calling for a trade war with a President who has been in office less than a week. Mr. Kenney, if a business knew that the building beside you was up for sale. You knew the 2 potential buyers. You have a sports and hunting shop and have invested a great deal in making sure that you’ve built a strong brand and following. One of the candidates sells collectables, the other is GreenPeace. When GreenPeace buys the building and paints a giant NO GUNS mural on the side of their building there is not a darned thing you can do about it. You can sue, you can protest, you can go on TV to complain about how this is hurting your business, but in the end there is nothing you can do about it. It is outside of your political jurisdiction.

Pipelines, a thing of the Past - and Bitumen Pucks

A side note, as I edit this piece. Canada’s economic value when negotiating international trade is evaluated based on the country’s stock market performance. Messing with that, like a trade war with our largest trading partner, could make the stock market volatile. This causes investors, especially around that commodity to look for stable options. With Argentina in chaos, manufacturing still working in sputters and spurts worldwide, and pipelines being used to store oil because facilities are still near maximum capacity. Stepping back from a trade war with a brand new American administration protects the price of Canadian oil stocks and Canadian Crude from volatility, and thus remains relatively stable. This is essential for Foreign Trade. I think Mr. Kenney simply forgot how far his portfolio goes and gravely underestimated Canadian support for pipelines.

It is not dirty oil, it is pipelines. Find a different way to ship it. Right before the NDP invested in the wretched rail cars, Warren Buffet made a large investment in rail cars and rail lines.  I’m not an investor but I understood that Buffet was hedging his bets that pipelines are a thing of the past and that oil will likely be hauled as bitumen cubes, non-combustible and relatively stable if spilled.

The public still wants oil, but they want how you get it to market to evolve.  Change how you get oil to market. Work with engineers and environmentalists to figure out how to move it safely and efficiently. Shift gears, look up, and find a way to move oil to markets that people can swallow.

My political prediction is that the next 2.5 years will be the busiest you ever see federal governments work frantically to make the least amount of changes possible to appease the masses. They have no time for pipelines, trade wars, or anything else. There is a pandemic, people are dying, people are upset, scared and angry. They want reassurance that life will start leveling out soon.

Sick and Tired of Upheaval

One person showed up by himself at the pro-Trump rallly in Washington on Inageration Day. Why? People are sick and tired of everything. It doesn’t matter which side you are on, we’ve had enough and will bar you from trying to stir up dust any means we need. No one else could get near, Americans needed one day when things went as usual. Thank you all to those who did whatever they did to make that happen.

Final Thoughts as I Go

That is what is needed right now. I know the pipeline thing sucks, but it was on their platform. They are only following through with the easiest policy to do. It has nothing to do with ‘Alberta’s brand’ or dirty oil. It is out of your jurisdiction and now that all hope is gone what do you hope for? This is a question that many Canadians are asking themselves. There is always an answer to that question. Now that all hope of that is gone, what do we hope for next? They still want the oil, they just want to get it differently. Get Amazon to deliver it?

How can Polyvagal be so wrong and yet useful in the therapy room?
March 28, 2021